I attended this morning's community meeting called by Council Member Erica Gilmore for Salemtown residents to look and and comment on developer R.C. Hazzard's concept that he calls "Ardelia Park," which is planned for the southwest corner at the intersection of 7th Avenue, North and Garfield Street.

Mr. Hazzard told the group that his design concept "draws inspiration from" homes in and around Germantown, but most specifically Germantown Court.

If the planning and re-zoning process is kind to Mr. Hazzard (he says he intends to ask for a change to MUN), the five virtually identical single-family homes will have floor plans that include three stories tucked into a front roof-line that has a two-story scale. Parking, including a garage on the ground floor, will be at the back. Mr. Hazzard showed sketches that highlighted homes with "numerous large windows, balconies, and gabled rooflines." 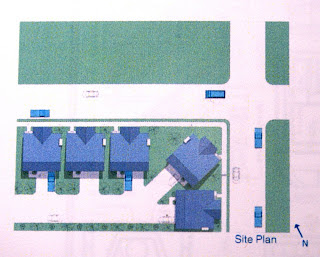 One concern that I expressed to Mr. Hazzard and CM Gilmore included that of how he would deal with surface water run-off, given that the concept looks to include between 1/3 and 1/2 of the lot being dedicated to driveways. I explained to him that stormwater run-off here is a continuing challenge and that before I supported his request for re-zoning, I would like to see either a pervious surface in the driveway specs and/or more green space in the overall concept.

Other concerns candidly expressed at the meeting included what looks like an identical, cookie-cutter repetition to the houses. Mr. Hazzard told critics that his design creates continuity, but it seems to me that he could bring in different subtle elements on each house that are distinct from the others. Doing so, in my opinion, would help break up the cloned or quintuplet look of the five houses together. If Germantown Court is truly the cue for Ardelia Park, then it is worth noting that the former does not rely on such strict repetition to hang together: not all of the roofs in GC are gabled; some are hipped and some of the porches differ from others, even as the common look is obvious.

Other developers in Salemtown have listened to feedback from residents here, and they even incorporated some suggestions into their concepts. That sort of openness makes the planning, re-zoning, and council public hearing process go smoother for these proposals. Getting letters and petitions of support to zoning request changes ought to be more attractive to developers than letters and petitions of opposition.

It was great that Mr. Hazzard met with us and I appreciate his effort on the front end. Sure, he did not have to do it, but staying on the down low is not effective communication and blindsiding us later increases the chances of distrust and opposition. It was an important first step that prompts me to say that I do lean toward supporting his single-family concept with the qualification that I would like to see stormwater dealt with and the quintuplet effect softened up a little.
Posted by S-townMike at 4/05/2008 11:44:00 PM