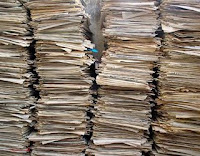 Today's peek into the old newsreader tells me that the mighty New York Times ran an online correction to their 8-day-old as-factual transmission of Eric Crafton's fictional claim about the California legislature. I do not know whether the correction was also made in hard copy, but does it really matter after a week? The damage is already done.

What's the big deal about transmitting Eric Crafton's fairy tales without critical dissection and verification? The Nashville City Paper does it all the time.
Posted by S-townMike at 1/18/2009 10:47:00 PM