While many see today's MLK Day celebration as complement to this week's Inauguration of Barack Obama, I tend to see it more of a contrast. Hardly a perfectionist, I shy away from the euphoria of the Inauguration and the chants that "we are one. " This week's "other" celebration, MLK Day, gives me pause to consider the ways we are still not and may in fact never be one, conditions as they are in America.

From beginning to end, this week is about civil religion, so I'll put it in religious terms: Dr. King was (and still is) a prophet rejected in his own land. He may have his day in the national pantheon of holidays, but his ideas are selectively retrieved. 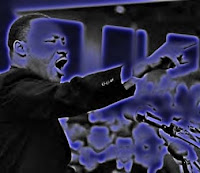 I do not have any objections to President-Elect Barack Obama trying to bring this land back together, but I do not believe that we should ignore prophetic dissent for the sake of priestly unity (keep in mind that the word "religion" comes from a Latin root, which means "to bind together," or "to tie fast").

The last major resource for King's thought was American civil religion--that complex of religious ideals of deliverance and salvation and political ideals of freedom, democracy, and equality that constitute the evolving collective self-definition of America .... [King's interpretation of civil religion] lead him creatively to extend the tradition of American jeremiads--a tradition of public exhortation that joins social criticisms of America to moral renewal and calls America back to its founding ideals .... King did not support and affirm the bland American dream of comfortable living and material prosperity. Rather, he put forward his down dream--grounded and refined in the black church experience, supplemented by liberal Christianity, and implemented by Gandhian methods of nonviolent resistance--rooted in the American ideals of democracy, freedom, and equality.

Today to me is much more like King's jeremiad and less like the benediction-like quality of the Inauguration of Barack Obama. It is separate and apart, and it is not easily bound together. Today is about our failings and our society's sin that not even the most arrogant rationalist can deny. It should be more of a national Lent, a day of sack cloth and ashes, when we reflect on and consider the ways that only some of us have reached the mountaintop but left others behind.
Posted by S-townMike at 1/19/2009 07:56:00 AM