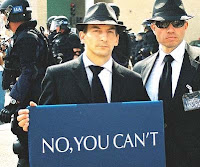 The Tennessean suggests that registered lobbyist Joe Hall is leading the charge of the beer distributor lobbyists against the single serve ban that was deferred last night so that the Chamber of Commerce can have its way with it.
Joe Hall was one of the lobbyists who did CM Jerry Maynard a solid by co-hosting a fundraiser at his own company in 2007 to help Maynard retire his campaign debt. I think we can guess how Mr. Maynard would have voted had the bill not been deferred last night.
And no surprise here:  Hall was once a mainstream media reporter for a large Tennessee newspaper.  See the connections between journalism, public relations, and political patronage? This is a reason why I have so much respect for journalistic objectivity. Don't cry for the recent contraction of newspapers and the loss of reporters. Whenever they jump out of reporting, they seem to land on their feet quite nicely at the intersection between special interests and government power. It's a big, full trough with room for many.  Who knows? If the Nashville Scene's Jeff Woods keeps sucking up hard enough to convenience store interests on the single serve bill, he may find his own professional future secure should the Scene ever hit the skids.