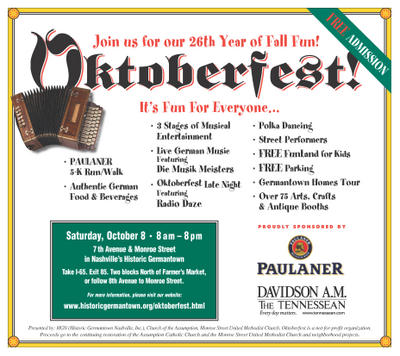 I lived in Louisville before moving to Nashville back in the late '80s. One of the annual rituals before the first Saturday in May (otherwise known as the day of the Kentucky Derby) in Louisville was the Kentucky Derby Festival, which was celebrated the two weeks preceding the Derby, and included parades, fireworks, and general revelries. Among my favorite parts of the celebration were the Derby Parties thrown by Louisvillians in their own homes either the Friday night or Saturday morning/afternoon before the Derby post time around 5:00 or 6:00. I especially liked the Saturday parties where everyone would sip on mint juleps and watch and wager amongst themselves on each of the races (broadcast on local TV) that preceded the Derby. I like the idea of pre-parties.

I don't expect even a week-long party to precede Oktoberfest; after all, the Kentucky Derby has been called "the most exciting two minutes in sports," while Oktoberfest is merely a polka-punctuated, beer-saturated, brat-logged celebration of a part of the heritage of North Nashville. But it would be great to start having pre-parties the night before Oktoberfest. I think I'll talk to S-townwife about planning a Friday night pre-party for the 2006 edition of Oktoberfest. Maybe have a backyard soiree or even a poker party. It could become an annual Salemtown tradition.
Posted by S-townMike at 10/07/2005 04:15:00 PM