One Of The Warts On The History Of North Nashville 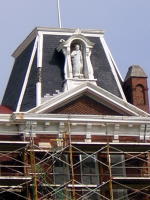 As I mentioned before, I recently read John L. Connelly's book, "North Nashville and Germantown." It is an adequate source for getting some historical background of the German and Swiss communities who lived, worked, and built the North End for a few decades before and after the beginning of the 20th Century.

It has its limitations. It is more like a scrapbook for the older aristocratic families than it is a strongly historical treatment of the North End. That makes some sense, given the date of its publication: 1982, just after Oktoberfest and Germantown's gentrification got off the ground and just after old North High School closed. As such, Connelly's book is more of a nostalgic memorial than it is a critical look at Germantown or "Butchertown" (as it was more popularly known one hundred years ago), which encompassed many more blocks north and west of the current Historic Germantown neighborhood. There are whole chapters where Connelly literally cuts and pastes newspaper clippings of community events rather than re-writing them into a narrative.

Perhaps its greatest limitation for me, a resident living in what was once the heart of the old Butchertown, is Connelly's blind eye to the issues of race. Aside from a handful of references, Connelly basically ignores racial currents even as he underscores the strong Euro-ethnic identity of Butchertown and its erosion by two World Wars against Germany and by the advent of suburbanization and white flight. (Connelly also glosses over class dynamics in North Nashville, but that's a subject for another post).

But the one time that Connelly does engage racial tensions in North Nashville, his account conveys, even if inductively, an atrocious picture of the locals about whom Connelly generally waxes nostalgic. It is what I consider one of the warts on the Germantown heritage. 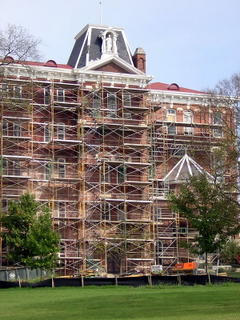 According to Connelly--again mostly lifting the account from a Nashville Banner article of the time--in 1923 St. Cecilia Academy (which was originally located in North Nashville; the building still stands and is pictured here) proposed to move elsewhere and sell the property to a "local Negro theological seminary." The Banner piece quoted by Connelly stated that 150 property owners in North Nashville held a mass-meeting at St. Cecilia to discourage the sale. Organizers of that meeting, according to the Banner,

described North Nashville as a high class residential section and expressed the cooperation of the North Nashville Improvement Association to the authorities of St. Cecilia in any movement looking to the prevention of the sale of this property to any parties not considered desirable to the citizens of that community. [p. 151]

Connelly says very little about this event and only places it within the post-World War I context of the German community in decline. In my opinion, within such a context and without clarification, his relation of the prevention of the sale of St. Cecilia's to black leadership could reasonably be interpreted as sympathetic to the racial prejudices of the early twentieth century Germantown residents.

It remains unclear to me why Connelly, himself a long-time Germantown resident, was uncritical or unreflective of this event. He could have used this account as a jumping-off point to discuss the historic shifts in the racial make-up of the Germantown area, but he dropped the ball. His omission is glaring. Perhaps he did not want to upset the elderly children of the earlier Germantown residents; that later generation, most of whose members had forsaken Germantown for the suburbs, re-visited the neighborhood in the early 1980's during Oktoberfest. If that was his reason, it is no less troubling than if he believes that turning back the sale of St. Cecilia's due to nothing but the buyer's skin color was justified. It troubles me, because the greater service to these neighborhoods is to provide an unflinching presentation of what has occurred to all those connected in someway to North Nashville, across ethnic divides, past, present, and future.

Moreover, while there is nothing else in Connelly's book that would lead one to the conclusion that there is more ugliness in our community's history, we are able to read between his lines. We do have a history of racial tensions in the south and in Nashville, so we should expect that the 1923 St. Cecilia's fiasco was symbolic, if nothing else, of other shameful events in North Nashville to be left to others to excavate.

Those of us who currently inhabit the North End live in a more diverse and open community than those who were here in 1923 or in 1982. We are less bound either to ethnic/tribal identity or to a communitarian sense of nostalgia that exaggerates beauty at the expense of the truth of warts. So, we are relatively more free than our forbearers were both to see the North End factually and to see it warts and all.
Posted by S-townMike at 10/09/2005 10:45:00 PM