Should The Rights To Styles of Historic Neighborhood Signs Be Reserved? 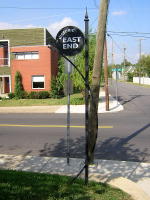 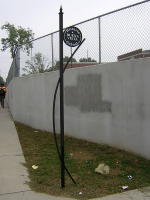 Perhaps some neighborhoods should find other forms of flattery besides imitation when it comes to those decorative neighborhood signs that are popping up around various city thoroughfares. The very attractive neighborhood signs scattered about the Historic East End has been copied in at least one other neighborhood on the North End. Actually, there is only one sign on the North End that is the identical match of the artistic East End signs: it is standing on the corner of 10th Ave. and Garfield and it reads "Historic Buena Vista School" on one side and "10th Avenue North" on the other side.

One of the things we discussed (at a very preliminary level) at the CAC meeting this past Tuesday was the possibility of funding decorative neighborhood signs as other neighborhoods like the East End and Edgefield have. When I pointed out that another North End neighborhood seems to have copied the East End, the community planner told the group that the single North End sign was controversial because the person (artist?) who created the East End signs has reserved rights on them.

Now I can understand a trademark for a title like "Historic East End" that goes on the signs, but I have some question as to whether the style and materials of the East End signs are themselves trademarked. There is no trademark notice on the East End signs. I can find no evidence of a sign trademark on the Historic East End website. Besides, trademarking a style of sign would be sort of like reserving rights to a wrought iron fence or the gothic cut of pickets in a stockade fence, would it not? If someone connected with Historic Buena Vista school was able to have a sign created by professionals that looks almost exactly like the East End signs, wouldn't it stand to reason that such a sign was available on the open market?

Copying the style of East End's signs may be bad form, but is it really illegal?