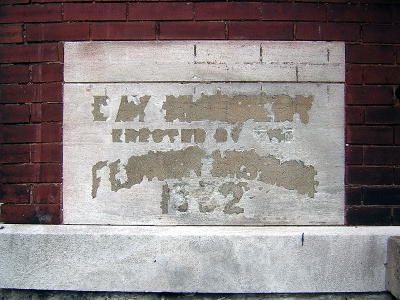 I now have more details that shed some light on the original group behind the building that sits at the corner of 10th Ave., North and Garfield Street (it currently houses a church). After spending some time Friday scouring more 19th Century Nashville Banners at the library, I drove over to the Office of the Register of Deeds. After finding the church's original 1965 deed, I used the computer database to track previous deeds back to 1892.

One mystery solved is the name of the group that erected the "Day Nursery." The 1892 deeds registry records that the "Flower Mission" bought two of the lots on which the current building sits. The cornerstone's original message is now clear:

The registry also raises the question of whether I misinterpreted the date as 1882 in my original post; that wouldn't be difficult given the defacing of the stone. The record says that the Flower Mission bought the land in 1892.
And what is this "Flower Mission"? That's an even more interesting piece to the puzzle. According to the state's records, a small group of Nashville women incorporated the Flower Mission three weeks before buying the property. The purpose of their charter was:

to establish, provide for, and maintain day homes in Nashville and Davidson County Tennessee for the care comfort nursing and education of the children of working women. To assist working women by providing for their children and for other charitable work for assisting the poor. And as provided for in the Act of the General Assembly of 1875 ... the support of any benevolent or charitable undertaking as ... hospitals for the sick, houses of refuge or correction, orphan asylums.

The Day Nursery seems to have been a part of the settlement house movement of the era, of which Jane Addams's Hull House in Chicago is perhaps most famous. According to Fisher, settlement houses served as "class mediators" between rich and poor in order to promote social order in the face of large immigrant populations and the bad health and social conditions of heavy industrialization in the Gilded Age. Social reformers of the period got involved out of a mixed bag of emotions, including a desire for personal meaning; hence, it is not surprising that the Flower Mission group was made up of women who, according to Fisher, would have been severely limited in professional opportunities.

But what makes the identity of the Flower Mission so intriguing for me is that one of the signers of its charter is Fannie Battle, Confederate spy, school teacher, and social reformer. According to Volunteer State professor, Carole Bucy, Battle got involved in philanthropic work in 1881 when she organized Nashville civic leaders into the Nashville Relief Society to respond to evacuees of one of the major floods of the Cumberland River. Battle next organized United Charities (UC), quit her teaching job, and served as UC Secretary-General for the rest of her life.

Teaching was one of the few professions that women were allowed in the late 19th Century. Influencing the political sphere was even more remote without the vote. It makes sense to me that Fannie Battle, who once experienced the rush and intrigue of being a spy, would leave teaching for the challenge of working in the breach between rich and poor caused by the massive social upheavals of the Gilded Age. To affect the social order progressively by informing the rich about "how the other half lives," and by encouraging the poor by providing services they would not have otherwise must have been a very attractive alternative to ambitious women like Battle.

Bucy does not refer to the Flower Mission or the Day Nursery.

However, she does write that Battle rented a room in a North Nashville neighborhood (Germantown; now Salemtown?) near the Warioto Cotton Mills (now Werthan Lofts) that employed women mill workers and that she established a daycare program.

The Fannie Battle Day Home is the legacy of that program and it continues in its present location in East Nashville on Shelby Avenue, although their website does not give any indication of a connection between the Shelby Avenue home and the Day Nursery at 10th and Garfield. A mystery remains: was the Flower Mission a link between that first room that Battle rented in Germantown and the current Day Home on Shelby Avenue?

There seems to be some evidence in the Register of Deeds that it was the link. Almost exactly two years after purchasing the property, the records show that the women of the Flower Mission changed their name to "The Day Home For Working Women's Children." I am assuming, without benefit of contrary evidence, that the common name, "Day Home," is the link between the 10th Ave. property and the Shelby Ave. property.

The facility remained the same, according to the records, until 1924 when The Day Home For Working Women's Children "gave" the property to The Junior League of Nashville for the sum of $5.00. At this point, the deeds conflict with John Connelly's book on North Nashville, which seems to report that Freewill Baptists owned the property from 1907. The deeds show that the Junior League turned the property around in 1930, selling it to the Freewill Baptists for $4,000.