Rosa Parks--who spent some time in Monteagle, Tennessee training in the ways of nonviolent resistance at the Highlander Folk School before the federal government shut it down--has died at the age of 92 of natural causes. Ms. Parks is most renowned for her refusal on December 1, 1955 to give up her seat in the black section of a segregated Montgomery, Alabama bus for a white man after the white section in front filled up. 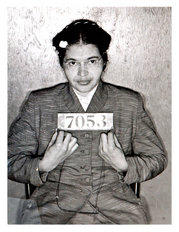 When the bus driver threatened to arrest her himself, she continued to refuse to give up her right to a seat in the black section, which forced him to get the Montgomery police to do so, thus, bringing greater publicity that Montgomery city officials would just as soon have avoided. Within a short time, not only did blacks win the right to ride in the black sections of public buses, they won the right to ride in any section of public buses.

Several black Montgomerians had preceded Ms. Parks in refusing to give up their bus seats to whites in 1955, but Ms. Parks was chosen as a symbol by the Montgomery movement--much like the Brooklyn Dodgers chose Jackie Robinson--as someone whose impeccable character could withstand harsh controversy, which would ensue with the Montgomery bus boycott. Taylor Branch said of Ms. Parks:

She wore rimless spectacles, spoke quietly, wrote and typed faultless letters on her own, and had never been known to lower herself to factionalism. A tireless worker and churchgoer, of working-class station and middle-class demeanor, Rosa Parks was one of those rare people of whom everyone agreed that she gave more than she got. Her character represented one of the isolated high blips on the graph of human nature, offsetting a dozen or so sociopaths. [Parting the Waters, pp. 125].