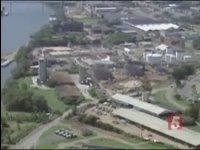 On Friday night, NewsChannel5 Investigative Reporter Phil Williams broadcast the alarming news that the Metro Water Treatment facility, which sits a block outside of Salemtown, is not only still using hazardous chlorine gas in the water treatment process, but keeps that gas stored in 4 large railroad cars on the northern edge of its property near a public road. The cars are guarded by one security guard, two chain-link fences topped with razor wire, and security cameras, none of which would do much to prevent a terrorist attack on those cars.

While other communities have changed to less hazardous agents for treating their water, Metro Water defends its use and the seemingly minimal safeguards it has to prevent an attack. Chlorine gas was used as a biological weapon in WWI because of its immediate toxicity; when inhaled it burns the lungs and literally causes a person to drown in their own fluids. Such a scenario would be disastrous for local neighborhoods like Salemtown and Germantown, but it would also be a calamity for sections of Nashville downwind of the location. Gas could blow across the river into East Nashville or into Downtown Nashville itself.

But obviously those of us who live in the Plant's shadow are the most directly affected by this if the danger is as Mr. Williams says it is. I would say that someone at Metro Water owes us a little more than a lone guard, some chain link fencing, and cameras, none of which will save us in either an attack or an accident. In a related story, NewChannel5 also reported that hazardous gas-filled tank cars pass through every section of Nashville regularly along the major railroad arteries.
Posted by S-townMike at 11/19/2006 10:35:00 PM