Whatever the ultimate source of the faith of a man or group of men may or may not be, it is indisputable that it is sustained in this world by symbolic forms and social arrangements. What a given religion is--its specific content--is embodied in the images and metaphors its adherents use to characterize reality .... Religion may be a stone thrown into the world; but it must be a palpable stone and someone must throw it. 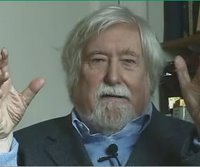 I just found out that one of the more important social scientists of the 20th Century, Clifford Geertz, died last month at the age of 80. Not only did I read most of Geertz's works as a grad student, but his Islam Observed: Religious Development in Morocco and Indonesia was my first scholarly introduction to Islamic religion and its diversity. Geertz's work balances out functionalist approaches to religion with an emphasis on "thick descriptions" of culture that go all the way down into social, political, and economic mechanisms. He embodied the Weberian emphasis on interpreting cultural forms like religion so that practicioners would agree that the scientist has accurately understood their practice. He is already missed.
Posted by S-townMike at 11/26/2006 08:52:00 PM