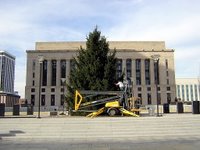 As you can see from the picture (of Christmas lights being hung by Christmas workers on top of a Christmas cherry picker), Metro is in the process of ignoring my opinion and putting up a tree again this year (although this time in the Public Square). It just cottons more controversy than it does good will, holiday cheer, or peace on earth. Thanks to Steve Gill and his bitter little elves on the Metro Council (who are not even satisfied that most council meeting opening prayers end with some variant of "in the name of our Lord Jesus"), the season of Christmas has become just another channel of resentment about a perceived lack of entitlement.

I don't know if Steve and the elves are planning another caroling spleen-vent around the tree this year (I doubt we'll see them at the Mayor's lighting ceremony next week), but if they are, then they'll need a little history lesson on the pagan, wassailing, and waiting roots of caroling. If they're going to try again to be puritanical about Christmas, then they cannot in good conscience go caroling.


Update: While I am somewhat disappointed that the Mayor put the tree up again this year, I do have to hand it to him. He gave the Christmas finger to the bitter council elves last year by sending their "Saving Christmas" resolution back to them unsigned on December 30.
Posted by S-townMike at 11/27/2006 03:57:00 PM