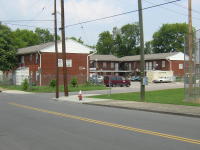 At last night's Salemtown Neighbors meeting, Metro Police reported that 3 weeks ago their Flex Unit made 5 felony arrests (25 total counts) at the Shiloh Apartments at the corner of 4th Av. and Hume St. During a "Knock and Talk" a tenant gave permission to the police to search her apartment and 3 guns, along with significant amounts of pot, crack, and cocaine were seized by police. The tenant was not among the 5 individuals arrested because police reported that she did not have knowledge of her guests' activities.

The Shiloh Apartments continue to be one of the more suspicious properties in Salemtown. Cars stream in and out of Shiloh at all times of the day and night. That property is rundown and it has been the center of crime in the past. It faces Morgan Park, where a lot of neighborhood children play, which only makes it a bigger hazard and libility to the community. According to Metro Records, the apartments are owned by Amos L. Howard, LLC, of 1214 Bayard Av. in Murfreesboro, TN.

While the police say that they are keeping an eye Shiloh, the primary challenge for our neighborhood watch is that the shape of the complex opens up to the park but closes off from the rest of Salemtown. The best line of sight on Shiloh is Morgan Park Place, which sits across the baseball diamond from Shiloh. So, essentially we have to rely on our Germantown compadres at MPP to watch out for Shiloh's shady activities; and they probably need binoculars to do so.

In an unrelated incident, during last night's police report, both attending officers left the association meeting to respond to an armed robbery in the Morgan Park area. Multiple units and police dogs were called out. Morgan Park Community Center, where we were meeting was locked down for a while, so that we could not leave the building for a while after the Salemtown Neighbors meeting ended. When we did leave, we found the neighborhood thick with cops.
Posted by S-townMike at 11/29/2006 08:10:00 AM