Megan Barry: The 2007 Candidate Best Suited to Help Metro Council Work as It Should 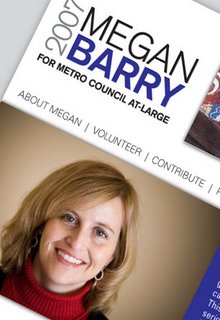 Making my first endorsement of this election cycle, I am pleased to commend to you heartily and without reservation Metro Council at-Large candidate Megan Barry for one of the five at-Large openings on the August 2 ballot. Ms. Barry's past experience on the Metro Council Conduct Board and her current job as an ethics and compliance officer makes a fit with the ethically-challenged Metro Council a natural, indeed a necessary, one.

Check out a couple of recent interviews of Ms. Barry. Regular readers of Enclave will be able to see that she had me at the mention of re-thinking the council's $2 million discretionary funds for infrastructure. She maintains that, rather than funding non-profits over the past 9 months, council members could have spent those funds on urgently needed affordable housing units for the homeless. We both agree that at the very least the funds should have gone to local infrastructure first.

You will also discover her impulse to eschew lightning rod issues over which council members can exercise very little influence (like illegal immigration and English Only) and to focus instead on matters in their control, like exhibiting clarity on conflicts of interest, putting more police on the streets, removing impedients to funding public schools, and leading for sustainability and LEED certification in Nashville's exploding development.

I had the chance to meet Ms. Barry face-to-face at a party that she and her husband Bruce Barry (Nashville Scene writer and Vanderbilt Professor) hosted over the weekend in honor of Thomas Jefferson's birthday. Talking more personally with her sealed the deal for me and for S-townWife. Not only will we be voting for her, but we have decided to make our first ever financial contribution to a candidate running for office; and we are pleased that the candidate is Megan Barry for Metro Council at-Large. I encourage you to vote for her, too.
Posted by S-townMike at 5/21/2007 03:05:00 PM