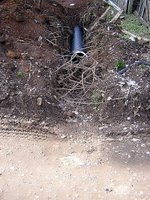 It has been a while since I updated you on the dispute over a drainage pipe at the townhouse development at the corner of 6th Avenue and Hume Street, but the drama is still developing via e-mails between residents and Metro Planning and Stormwater Engineers. There are critical unanswered questions about the approval of the run-off plan and about the reasons given for shunting stormwater run-off toward an adjoining low-lying property that includes a historic, century-old house.

First of all, in e-mail, one Planning Official questions earlier claims by the developers, Dale and Associates, that Planning's zoning's approval did not deal with water run-off issues "at all". That official told inquiring neighborhood association members that, in fact, the planning process does include water run-off issues. It is clear from the December 2005 Planning Commission Meeting minutes, where zoning for 6th and Hume was discussed, that stormwater issues are dealt with (p. 74):

[6th and Hume property] approved [by Planning] with the condition that the following issues be resolved prior to or with the submittal of the final SP application:
1. Stormwater needs a full size set of plans to review, prepared by a Registered Engineer in the State of Tennessee. The SP provided did not have a stamp or any engineer information of any sort.

Another Planning official told neighbors via e-mail that the Planning Department itself is not funded to perform the engineering review required to advise on stormwater regulations. Instead, Metro's Stormwater Engineers are responsible for approving or denying the plans of Dale and Associates and the owners of the property. (Note to those of you who deal with the Planning Department: that division itself does not deal with the significant engineering details of stormwater run-off).

Metro Stormwater has yet to respond to neighborhood leaders with their reasons for approving that all property drainage be channeled through a single pipe directed at a low-lying property. However, the neighbor who lives on the affected property wrote an eye-popping mouthful to one Stormwater Engineer:

It seems like an unacceptable oversight to have permitted the [Schoene Ansicht project] to be moved forward without ... addressing the water run off problems .... [O]ur combined sewer and storm drains are exceptionally old ... and inadequate. The city has failed to respond satisfactorily to our concern that these systems be upgraded. The very least that the citizens ... have a right to expect ... is that our problems are not added to by private developers whose interests are primarily in their own profit and who have no long term vested interest in our neighborhood. If the site plan did not address these issues, then those government departments whose job it is to represent ... the interests [o]f the community at large should have seen to it that the plans were returned to the planning department ... rather than pushed through to save time and expense for the developer. I wonder if the engineer(s) who went along with this site plan would have so readily done so if the pipe were directed toward his (their) own home(s).

Amen. As soon as I hear something from Stormwater Services, I'll follow up.