First Base Has Nothing to Do with Kissing 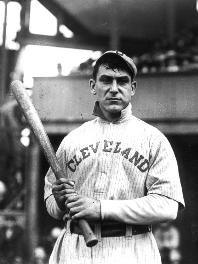 Despite the snow and ice, today is the first fit of summer for me, as Major League Spring Training starts in Florida and Arizona with pitchers and catchers reporting for duty.

The player pictured is Napoleon "Nap" Lajoie, one of the greatest second basemen ever to play the game. Even more than 100 years after setting it, he still holds the American League single-season batting average record (.426 in 1901). He was so good that the Cleveland club was named for him. They were the "Naps" during the 12 years he played there and they only became the "Indians" after he left.

Baseball is our pastime, a definition of which is that diversion that occupies our thoughts. So, occupy your thoughts with this warming reflection:

The lure of baseball is in its subtleties: situational defense, pitch location, pitch sequence, statistics, ball parks, history, and player personalities. It's been noted that the game itself has no time limit, and its playing surface, rather than rigidly rectangular and standardized, extends theoretically to eternity from a single point (home plate) to beyond its own fences. For the avid fan, the game—even during its slowest points—is never boring because of these nuances. Therefore, a full appreciation of baseball naturally requires some knowledge of the rules; it also requires deep observation of those endearing and enduring qualities that give baseball its unique style [Source Jump].

Email ThisBlogThis!Share to TwitterShare to FacebookShare to Pinterest
Labels: Baseball