The developers of the property at 8th Avenue North and Hume Street say that their stormwater run-off system includes treatment and purification and that it will connect underground directly to the sewer system. The 8th and Hume development is scheduled for Metro Council Public Hearing in March.

In the wake of the controversy over the Schoene Ansicht development two blocks away from 8th and Hume, I contacted Core Development and asked them if there had been any changes made to their plans presented to Salemtown Neighbors Neighborhood Association in January 2006. I also asked them how they were going to handle stormwater run-off.

According to Metro contour elevation maps, Hume Street drops 36 feet from the top of the hill at 8th and Hume to the corner of 5th and Hume, which is the site of regular ponding during storms. The problem with the Schoene Ansicht development is that directing run-off on the surface instead underground would not seem to alleviate the problems at 5th and Hume. Likewise, if the 8th and Hume development did not direct their run-off underground, it would create more problems for residents living at the bottom of the hill. 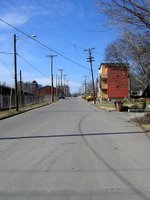 Fortunately, the Water and Sewerage Department has communicated that 8th and Hume will be allowed to hook-up directly to the sewers. And Core's Aaron White confirmed that no changes had been made to the original plans (which received positive feedback at last year's Salemtown Neighbors meeting).

What is not clear yet, according to Core, is whether or not they will hook-up to the 8th Avenue sewers or to the Hume Street sewers. If the latter, I am left to wonder: if 8th and Hume can go underground, then why can't Schoene Ansicht do likewise? However, at the very least, less stormwater run-off will be flowing down Hume once the 8th and Hume project is completed because they will be channeling it underground directly to sewers. That's good news for neighbors down hill of the development.
Posted by S-townMike at 2/23/2007 10:57:00 AM