For those who prefer an issue checklist to help make voting decisions and for those who consider the 2006 Kay Brooks fiasco a litmus test for either voting or not voting for certain candidates, I give you the Metro Council's roll call vote that put Ms. Brooks on the School Board in May 2006 over the heads and the wishes of the school district that she was installed to represent.

Here are the names of those currently running for office and who voted to plug Kay Brooks in the only open public school board seat she will probably ever occupy (unless some future Metro Council repeats this Council's mistake):

Here are the names of those current candidates who voted for Ms. Brooks' opponent, who was months later elected popularly in the more legitimate race for the open school board seat: 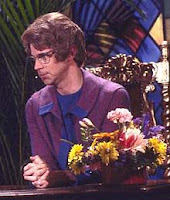 As I pointed out before, Kay Brooks blogs more and more like the church lady every day. In her latest installment of screeds against council members who did not vote for her in May 2006, she compares squeaky clean District 6 Member Mike Jameson to the Tennessee Waltz convicts. She refers to Mr. Jameson x3 using the word "special," which is further proof of her resemblance to the church lady. Of course, she is also prone to overblown and faulty comparisons: she once compared public education to slavery, so I do not put much stock in her linking Jameson to the Tennessee Waltz infamy.

But what is so patently ridiculous about her swipes at Mr. Jameson is that she totally ignores information from the same article that several Council candidates who voted for her in May 2006 have received nearly $10,000 in campaign contributions from convention center lobby groups. More than half of those contributions went from Gaylord to JB Loring and $1,000 went from Gaylord to Charlie Tygard.

A little money may certainly corrupt, but more money corrupts more absolutely. And when a candidate has been generally above reproach like Mike Jameson, he deserves a better fate than to be mentioned in the same breath with those properly convicted in a bribery scandal.
Posted by S-townMike at 7/17/2007 02:10:00 PM